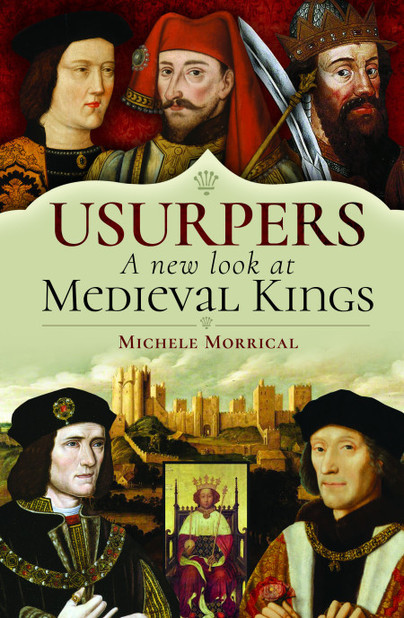 In the Middle Ages, England had to contend with a string of usurpers who disrupted the British monarchy and ultimately changed the course of European history by deposing England’s reigning kings and seizing power for themselves. Some of the most infamous usurper kings to come out of medieval England include William the Conqueror, Stephen of Blois, Henry Bolingbroke, Edward IV, Richard III, and Henry Tudor. Did these kings really deserve the title of usurper or were they unfairly vilified by royal propaganda and biased chroniclers?

In this book we examine the lives of these six medieval kings, the circumstances which brought each of them to power, and whether or not they deserve the title of usurper. Along the way readers will hear stories of some of the most fascinating people from medieval Europe, including Empress Matilda, the woman who nearly succeeded at becoming the first ruling Queen of England; Eleanor of Aquitaine, the queen of both France and England who stirred her own sons to rebel against their father, Henry II; the cruel and vengeful reign of Richard II which caused his own family to overthrow him; the epic struggle for power between Henry VI, Margaret of Anjou, Richard of York, and Edward IV during the Wars of the Roses; the notorious Richard III and his monstrous reputation as a child-killer; and Henry VII who rose from relative obscurity to establish the most famous royal family of all time: the Tudors.

REVIEWS:
“There were many tidbits in this book that I either did not know, or had not considered before. Food for thought! There is such a wealth of rich history, this book could have gone on for pages and pages.”

“I found this book fascinating! Very well research and the author did a great job. Highly recommend!”

“A fascinating look at the early years of English rule and the politics behind the hostile takeovers of the throne. The stories surrounding each of the events were intriguing and really kept my interest.”